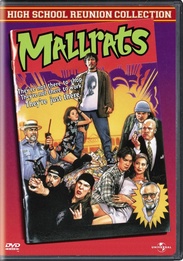 Following the smash success of his first feature, Clerks, Kevin Smith returned with Mallrats. Spawning a raft of characters and in-jokes that Smith would carry throughout his career, the film continued the one-of-a-kind comedic world known as the View Askewniverse.

Rated R for strong language, including sexual dialogue, and for some scenes of sexuality and drug content.