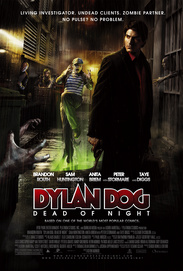 DYLAN DOG: DEAD OF NIGHT is a new horror/comedy film based on one of the world's most popular comics (60 million copies worldwide). Brandon Routh stars as Dylan Dog, world famous private investigator specializing in affairs of the undead. His PI business card reads "No Pulse? No Problem." Armed with an edgy wit and carrying an arsenal of silver and wood-tipped bullets, Dylan must track down a dangerous artifact before a war ensues between his werewolf, vampire and zombie clients living undercover in the monster infested backstreets of New Orleans.

Rated PG-13 for sequences of creature violence and action, language including some sexual references, and some drug material.