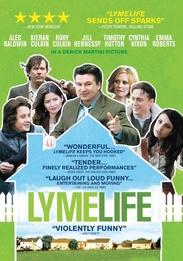 Based on the true childhood experiences of director Derick Martini, Lymelife is the coming of age story of 15-year old Scott growing up in suburban Long Island. While caught up in his first love, Scott watches the relationships of his parents and their neighbors slowly crumble as they try to keep up with the changing times and expectations of the 1970s. Critically acclaimed, Lymelife features a magnificent ensemble cast, with incredible performances that make you laugh and cry along with them.

Rated R for language, some sexual content, violence and drug use.