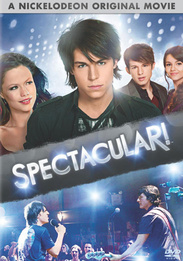 Get ready to rock the house with the Nickelodeon smash original movie Spectacular! When bad boy Nikko (Nolan Gerard Funk) gets dumped by his band, he finds the path to stardom can take some unexpected twists. Enter Courtney (Tammin Sursok), a show choir girl in need of a new star front man to help her group "bring it" and snag the national championship away from her arch rival Tammi (Victoria Justice). When this unlikely duo gets together, it's a rock explosion that lights up the stage in a way you've never experienced before. Featuring 10 hot new tracks from the music team behind High School Musical and hip dance moves that will have you movin' like a super-star!