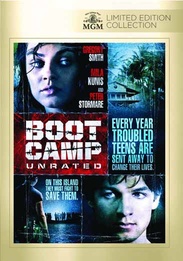 A group of troubled teens, including Sophie Bauer (Mila Kunis), are abducted and brought to the Camp Serenity rehab program on Fiji. The young men and women soon find themselves at the mercy of the campâs deranged administrators, who subject them to solitary confinement and psychological torture of every kind. As Sophie and her boyfriend, struggle to escape, she fights for her sanity â and her life â in this white-knuckle thriller that proves paradise can be deadly.