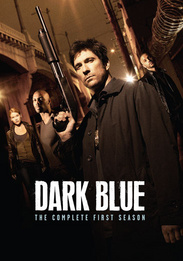 LAPD Lt. Carter Shaw (Dylan McDermott) and his special undercover task force understand that to collar criminals, one must first get on their level. They also know that going undercover may require cutting ties with those who mean the most. Adrift, isolated and frequently faced with situations that strain the line between right and wrong, these officers know that all that matters is loyalty to each other and to the task at hand: bringing down the bad guys. From Jerry Bruckheimer Television (the CSI Trilogy, Without a Trace, Cold Case) comes another edgy and atmospheric series about dedicated law enforcers operating in the shadows and leading double lives. Omari Hardwick, Logan Marshall-Green and Nicki Aycox also star. This 4-Disc, 10-Episode Season One Collection of their edge-of-your-seat investigations will take you to the edge of darkness -- and beyond.