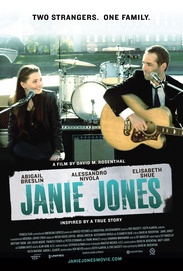 Ethan Brand (Alessandro Nivola) and his band are on the comeback trail when a former flame (Elisabeth Shue) drops a bomb in his lap: their 13-year-old daughter, Janie Jones (Abigail Breslin). Ethan refuses to believe Janie is his kid, but when her mom suddenly leaves for rehab, the child has no place to go but into the tour bus and on the road with the band. With no inclination toward fatherhood, Ethan continues his hard-living ways, leaving Janie to fend for herself in the dive bars and sleazy motels along the way. As Ethan's self-destructive spiral threatens to destroy his band's future, Janie uses her own surprising musical talents to help guide him down the rocky road to redemption. Nivola and Breslin naturally embrace their musical charactersâboth actually sing and perform in the filmâwhile developing Ethan and Janie's relationship in a refined way to delicately express the emotional needs of the characters. Writer/director David M. Rosenthal blends the musical setting with road trip movie elements that add subtle layers to the dynamic of his two main characters.