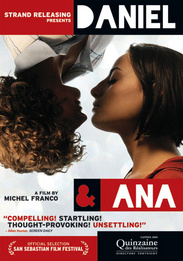 From the producers of THE CRIME OF FATHER AMARO, one of Mexico's highest grossing films, comes "Daniel and Ana", siblings who are both at defining moments in their lives. Ana is about to be married and Daniel is a teenager discovering his personal and sexual identity. Yet the harmony in their lives is instantly shattered when they are kidnapped and something happens which forces them to confront their desires and fears. Nothing they have known will ever be the same again.