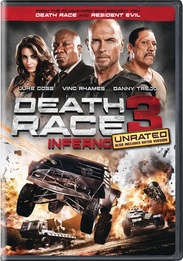 Repentant convict Carl Lucas (Luke Goss) - aka Frankenstein - is a legendary driver in the brutal prison blood sport known as Death Race. Only one victory away from winning freedom, Lucas is plunged into his most vicious competition yet: the first ever Desert Death Race. Through South Africa's infernal Kalahari Desert, Lucas is pitted against ruthless adversaries and powerful forces at work behind the scenes to ensure his defeat.

Rated R for violence and language throughout and sexual content.