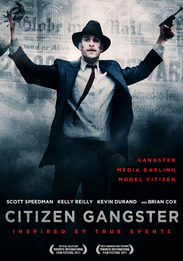 The first feature from writer/director Nathan Morlando, CITIZEN GANGSTER is based on the true story of Edwin Boyd (Scott Speedman), the man who became postwar Toronto's most famous criminal. Edwin Boyd has returned from WWII and is dismayed by public indifference towards veterans and humiliated by his inability to fulfill his dream of being a Hollywood star or provide for his children and wife Doreen (Kelly Reilly). Seeing only disappointment in the face of his policeman father (Brian Cox), Eddie is desperate and starts to rob banks. But what starts as friendly and flirtatious robberies, performed while wearing thick makeup, evolves over time into a career that when mixed with a gang of small time criminals is not unlike that of Clyde Barrow or Butch Cassidy, in which crime and love are mixed to get explosive results.

CITIZEN GANGSTER is the powerful true story of one man's rise from obscurity to criminal celebrity -- and the dangerous price he pays for it.