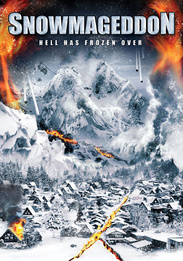 Itâs Christmas Eve in Normal, Alaska, and not a flake of snow has fallen yet. But when mysterious earthquakes, explosive fires, ice meteors and underground spikes suddenly strike the quaint mountain village, the local sheriff (David Cubitt of âMediumâ), his helicopter pilot wife (Laura Harris of âDead Like Meâ and â24â) and their two kids must figure out why nature hates the holidays. Could a supernatural snow globe be triggering this season of destruction, or will a massive volcano roast Earthâs chestnuts forever?

Rated PG-13 for disaster action and some bloody images.