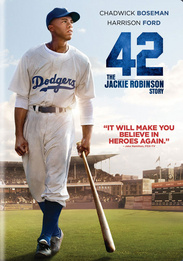 Hero is a word we hear often in sports, but heroism is not always about achievements on the field of play. "42" tells the story of two menthe great Jackie Robinson and trailblazing Brooklyn Dodgers GM Branch Rickeywhose brave stand against prejudice forever changed the world by changing the game of baseball.