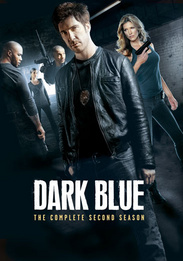 Season two of Dark Blue continues to thrill as Dylan McDermott stars as Carter Shaw, part of a crack undercover team of police officers so covert, many of their own colleagues are kept in the dark. The strong-willed Carter often pushes the limits of the law in his efforts to bring down bad guys through complex undercover assignments. His team includes Ty (Omari Hardwick), whose commitment to his covers have left him struggling to define the boundaries between work and his home life; Dean (Logan Marshall-Green), a shoot-from-the-hip cop whose activities make his fellow team members wonder which side he's really on; and Jaimie (Nicki Aycox), a green patrol cop brought in for her shady past and excellent skills in lying, who's out to prove that she has what it takes. New to the team this season is Alex Rice (Tricia Helfer, Battlestar Galactica), a sarcastic and ambitious, Berkeley-educated FBI agent brought in to oversee these covert cowboys. But it's Carter she really has her eye on .