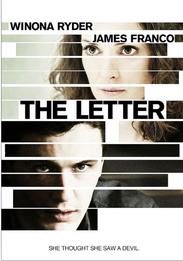 Martine Jamison (Winona Ryder) is a NY theatre director beginning rehearsals for a new play starring her boyfriend opposite a young beauty. As rehearsals continue, Martine has periods of disorientation that quickly deteriorate into vivid hallucinations as she becomes convinced Raymond is trying to poison her. As Martine's mental state devolves, she begins to rewrite her play...and art and life become inseparable.

Rated R for sexuality and language.