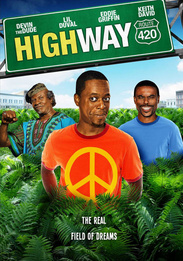 Two marijuana-loving brothers, Earl and Ray Ray, embark on a journey in search of a mythical highway in Kentucky, which they believe will lead them to "marijuana nirvana". After encountering several obstacles they find the crop and with a strategic plan in place Earl and Ray Ray attempt to trespass and steal the crop. Leaving a path of destruction behind them these two can't seem to get out of Kentucky fast enough.

Rated R for pervasive drug content and language, and some sexual material.