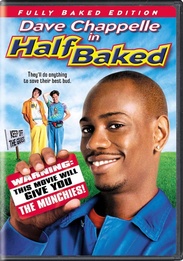 Loaded with some of today's hottest young comedy stars, Half-Baked is the hilarious adventure of three lovable party guys trying to bail their best bud out of jail. But just when it looks like they'll come to his rescue, everything comes dangerously close to going up in smoke.