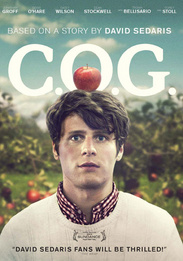 This autobiographical comedy is the first-ever screen adaptation of the work of acclaimed writer David Sedaris. Jonathan Groff (Glee) stars as David, a young man who plans a summer in the Northwest with his friend Jennifer (Troian Bellisario of Pretty Little Liars), working on a farm. But when Jennifer unexpectedly bails on him, David is left to dirty his hands alone and jump into a series of misadventures that will take him to unfamiliar - and hilariously uncomfortable - places.