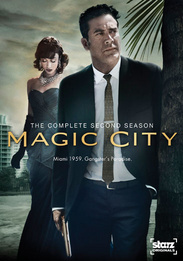 Ike Evans risks everything in a life and death battle to rid his Miramar Playa Hotel of the mob and Ben âThe Butcherâ Diamond. Ikeâs dangerous plan to defeat Ben takes Ike from Havanaâs glamorous casinos to dealings with a new devil â Benâs boss in the Chicago Outfit. Ikeâs wife Vera gets a second chance at her former dancing glory, while sons Stevie and Danny drift farther from Ike â Stevie toward the power and rewards of Benâs dark world, Danny into the moral righteousness of Stateâs Attorney Jack Klein. Changes in Castroâs Cuba ripple to the shores of Miami Beach, and a new world order begins to tear the Evans family apart. Even if Ikeâs long-shot gamble to take back his hotel succeeds, will the price of victory be too high?