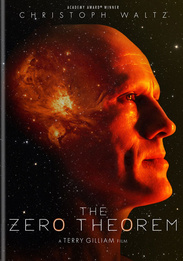 Acclaimed director Terry Gilliam (Brazil, 12 Monkeys, Fear and Loathing in Las Vegas) returns with the visually stunning sci-fi epic The Zero Theorem, starring Academy Award winner Christoph Waltz as Qohen, an eccentric and reclusive computer genius. Living in isolation, Qohen is obsessively working on a mysterious project personally delegated to him by Management (Matt Damon) aimed at discovering the meaning of life -- or the complete lack of one-once and for all. Increasingly disturbed by visits from people he doesn't fully trust, including the flirtatious Bainsley (MÃ©lanie Thierry), his unpredictable supervisor Job (David Thewlis), and would-be digital therapist Dr. Shrink-Rom (Tilda Swinton), it's only when he experiences the power of love and desire that he's able to understand his own reason for being.

Rated R for language and some sexuality/nudity.