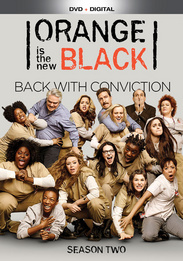 Nominated for 12 Primetime Emmys® and 4 Golden Globes®, "Orange is the New Black" is a fierce and funny series that follows Piper Chapman (Taylor Schilling) when a crime she committed in her past sends her to an all-womens prison with an unforgettable and irreverent group of fellow inmates. Shocking revelations and new arrivals shake up the lives and relationships of Litchfield's prisoners in this highly anticipated second season.