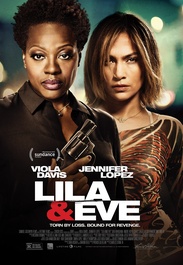 A tense and exciting film, LILA AND EVE is directed by Charles Stone III (DRUMLINE), and tells the story of Lila (Academy AwardÂ® Nominee Viola Davis), a grief-stricken mother who in the aftermath of her sonâs murder in a drive-by shooting attends a support group where she meets Eve (Jennifer Lopez), who has lost her daughter. When Lila hits numerous roadblocks from the police in bringing justice for her sonâs slaying, Eve urges Lila to take matters into her own hands to track down her sonâs killers. The two women soon embark on a violent pursuit of justice, as they work to the top of the chain of drug dealers to avenge the murder of Lilaâs son.

Rated R for violence and language.