Sex and the City: The Complete Collection 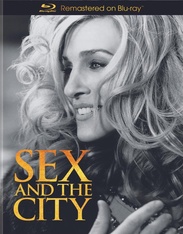 Carrie Bradshaw and friends Samantha, Miranda, and Charlotte have offered us their hilarious, outspoken and outrageous look at dating, mating and relating in the big city. Celebrate the franchise that explores the day-to-day (and night-to-night) world of single women with the ultimate collector's set - all 7 seasons, plus the two films, and an exclusive bonus disc!

This is a multiple-item set. We have not yet added the individual components.