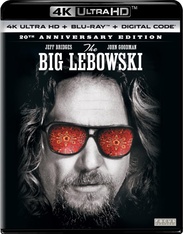 Jeff "The Dude" Lebowski (Bridges) is the victim of mistaken identity. Thugs break into his apartment in the errant belief that they are accosting Jeff Lebowski, the eccentric millionaire philanthropist, not the laid-back, unemployed Jeff Lebowski. In the aftermath, "The Dude" seeks restitution from his wealthy namesake. He and his buddies (Goodman and Buscemi) are swept up in a kidnapping plot that quickly spins out of control.