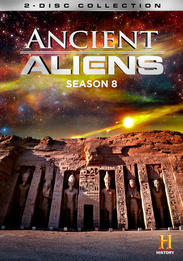 This season of ANCIENT ALIENS® travels the universe across an expanse of tens of thousands of years to the present day as we investigate the possibilities and probabilities of life beyond Earth. We look at the unexplainable - enormous man-made caves, structures, crop circles containing encrypted messages, and complex mathematical and astronomical equations perplexing our leading scientists. Experts have found thousands of strange drawings of beings with blue skin, multi-limbed humanoids, and more. Could many of these beings depicted throughout the world and across time actually reflect extraterrestrial visitors? Since the launch of NASA's Kepler space telescope in 2009, scientists have identified thousands of planets capable of life. Is it possible that this discovery finally answers the age- old question: "Are we alone in the universe?Â"