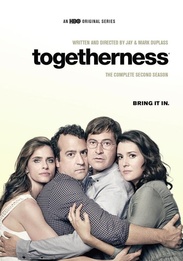 From executive producers/writers/directors Jay and Mark Duplass comes a new season of Togetherness, the comedy that follows the highs and lows of four adults trying to balance their relationships and individual dreams. After nearly reaching their breaking points last season, Brett and Michelle (Mark Duplass and Melanie Lynskey) struggle to make sense of where their marriage might be heading; Michelle tries to handle her guilt over a night with another man while pushing ahead with her charter-school plans, while an out-of-work Brett looks for artistic inspiration. Following his big acting break, Alex (Steve Zissis) returns from New Orleans reinvigorated -- and with a new girlfriend in tow -- but his newfound success threatens to disrupt his relationships back home. Meanwhile, Michelle's sister Tina (Amanda Peet) has a hard time coming to terms with what should be her "happily ever after" life with her movie-producer boyfriend, and is thrown for a loop when she realizes her biological clock is ticking. Through it all, this makeshift family continues to face the hilarity and anxieties of everyday life, while proving that they're truly at their best when they're together.