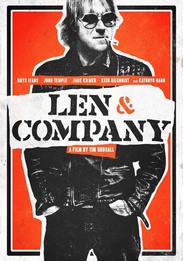 Rhys Ifans goes to eleven as a rock star staring down a personal crisis in this smart, acerbic comedy. He plays Len, a punk rocker-turned-in-demand pop producer, who, following a very public meltdown, retreats to his country home for some time away from the pressures of the business. His solitude is interrupted, however, when he receives a visit from some surprise guestshis estranged son and pop star protÃ©gÃ© who arrive with complications of their own and who shake the prickly Len out of his stupor. Propelled by an irresistible performance from Ifans, Len and Company offers wry and incisive observations on fame and family.