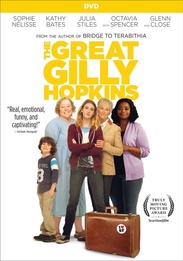 A feisty foster kid's outrageous scheme to be reunited with her birth mother has unintended consequences in The Great Gilly Hopkins, an entertaining film for the entire family. Gilly Hopkins (Sophie NÃ©lisse) has seen more than her share of foster homes and has outwitted every family she has lived with. In an effort to escape her new foster mother Mamie Trotter's (Kathy Bates) endless loving care, Gilly concocts a plan that she believes will bring her mother running to her rescue. But when the ploy blows up in Gilly's face it threatens to ruin the only chance she's ever had to be part of a real family.