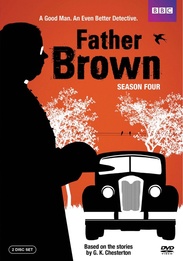 The loveably quirky Father Brown (Mark Williams) cycles back on to the screens for a fourth series of mysteries in the sleepy Cotswold village of Kembleford. Once again, he is aided by no-nonsense parish secretary Mrs. McCarthy, glamorous socialite Lady Felicia Montague and her chauffeur Sid Carter. In this series a man missing for years returns just as his wife is about to remarry, but when he's found dead, suspicion falls on those closest to him. The village gets a dose of Hollywood glamour when a film crew arrives. And Sid's romance with a brewer's daughter gets complicated when he finds out she's not only married and he is also her alibi for the night her father is murdered.