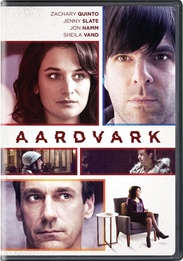 Aardvark follows Josh Norman (Zachary Quinto), a troubled man who has lived in the shadow of his brother Craig (Jon Hamm) for so long he starts seeing that shadow everywhere. After experiencing a series of hallucinations involving Craig  an actor, and the star of a popular TV drama  Josh places himself in the care of Emily (Jenny Slate), a young therapist.

Emily is forced to wade deeper and deeper into Josh's imaginary world, and along the way forms her own obsession with his famous brother. While Emily and Craig explore a potentially disastrous attraction, Josh begins a relationship with a young woman, Hannah (Sheila Vand), who might be his soul mate if only he could be sure she exists.