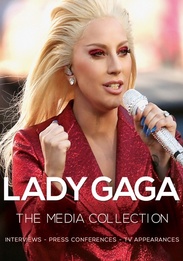 With her fifth album just released and early reviews suggesting it could well be her finest to date, Lady Gaga is back with a capital B. But it's not as if she's been a lady of leisure since her last long player Cheek To Cheek - her collaboration with jazz crooner Tony Bennet - came out back in 2014. Perish the thought; Gaga has indeed been a busy girl across the past two years. The Cheek To Cheek Tour ran from December '14 through August '15, during which time she also got herself engaged (to actor Taylor Kinney) and released her second fragrance, Eau De Gaga. Between October 2015 and January 2016, LGG starred in 20th Century Fox's miniseries American Horror Story (as the hotel owner) and won a Golden Globe as best actress for her efforts. She went on to edit V magazine's January '16, 99th edition and won Editor Of The Year award for so doing. She performed the national anthem at Super Bowl 50 and a tribute to David Bowie at the 58th Grammies. Multitasking doesn't come into it! This DVD contains a superb collection of filmed interviews, contributions, press conferences and other media appearances from across Lady Gaga's career, and in so doing illustrates what an extraordinary, albeit witty, compassionate and intelligent, human being the woman christened Stefani Joanne Angelina Germanotta really is. Providing too, for the first time, a proper 'behind the scenes' look at a real 21st century icon's world, this film is certain to become the standard by which future documents about this remarkable lady are judged.