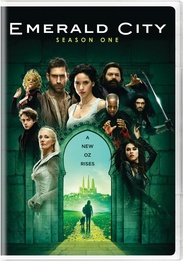 Swept up into the eye of a tornado, 20-year-old Dorothy Gale (Adria Arjona) is transported to another world â a mystical land where an all-powerful ruler (Vincent D'Onofrio) governs over one kingdom, has outlawed magic, and faces not only the wrath of a growing cauldron of witches but a looming disaster brought on by a mythical force. As Dorothy navigates this dangerous world and uncovers her true destiny, we'll see that there's no place like... Oz.