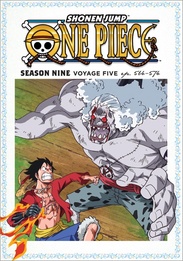 The Straw Hats revel in a battle well-fought, but there's no time to celebrate yet. The mighty ship Noah is still falling and Luffy goes into an Elephant Gatling rampage to save the island. Luckily, he isn't the only one who hears the princess's cry for help. Unexpected saviors emerge from the deep to lend a hand-or rather, a fin-and just in time, too. The rubber-man is losing blood at a deadly rate, but the Fish-men still hesitate to step in. Only someone worthy of joining the Straw Hat crew would be brave enough to break the blood-donating taboo. Putting the past behind them, the whole island comes together for a feast the pirates can't refuse. Just when the palace under the sea is finally at ease, Luffy boldly challenges one of the Four Emperors with a promise that may come back to bite him!