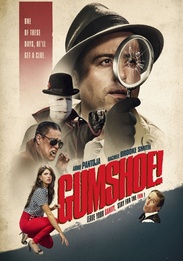 MAULER MARETTI BRUTALLY SLAIN! When hopeless private eye Biff Basham is hired by a seductive nightclub singer to pay off a blackmailer, he thinks his money worries are over. But when his client's husband is murdered, he is plunged into a dangerous world of organized crime and espionage in the seedy underbelly of New Orleans. With enemies on all sides and totally out of his depth, Biff must work out who he can trust and unmask the killer before he becomes the next victim...