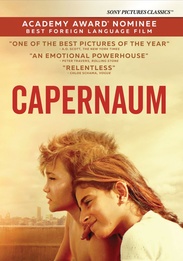 CAPERNAUM, a new film by Nadine Labaki and winner of the Grand Jury Prize at the Cannes Film Festival, follows Zain, a gutsy streetwise child, as he flees his negligent parents. He survives on the streets through his wits while taking care of Ethiopian refugee Rahil and her baby son, Yonas. After being arrested and put in jail, Zain finally seeks justice against his parents in court for the "crime" of giving him life.

Rated R for language and some drug material.