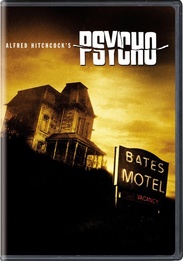 Leigh is on the lam with stolen money and makes the mistake of checking into the Bates Motel, run by Perkins... and his mother. Hitchcock's horror film is best remembered for the shower scene and Bernard Herrmann's chilling score.