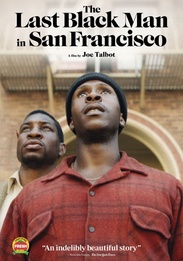 After Jimmie enlists his best friend Mont to help reclaim the Victorian home his grandfather built in the heart of San Francisco, they begin a search for belonging in a rapidly changing city that seems to have left them behind. A wistful odyssey populated by skaters, squatters, street preachers, playwrights, and other locals on the margins, THE LAST BLACK MAN IN SAN FRANCISCO is a poignant and sweeping story of hometowns and how they're made - and kept alive - by the people who love them.

Rated R for language, brief nudity and drug use.