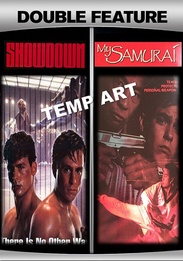 SHOWDOWN:Ken Marks (Kenn Scott, Teenage Mutant Ninja Turtles II: The Secret of the Ooze) finds a dangerous enemy on his first day at his new school; an enemy who makes his living as the champion of an illegal fighting operation. School janitor and ex-cop Billy Grant (Billy Blanks, The Last Boy Scout) trains Ken to defend himself. What Billy doesn't know is that the man behind it all is the one man from his past who wants him dead.

This classic martial arts blockbuster from the director of Best of the Best features an all-star cast that includes Christine Taylor (The Wedding Singer), Patrick Kilpatrick (Death Warrant), James Lew (Best of the Best) and Brion James (Blade Runner) in the movie the proves there's not a problem in the world that a good roundhouse kick to the face can't solve.

MY SAMURAI:When young Peter McCrea (John Kallo) witnesses a gang murder, he is thrust into a dangerous world where strength and power are the keys to survival. His only hope is Young Park (Julian Lee, Assassin's Code), a powerful martial arts master with a gift for destroying any opposition. On the run from the gang and the police, Young Park must teach Peter the secrets of self defense - and inner strength. From one action-packed sequence to the next, Peter learns about courage, force, and himself - so that he may confront the ultimate challenge of his life.

MY SAMUARI is the solo directorial debut of Fred H. Dresch after making his mark as an assistant director on cult classics such as Final Exam and Syngenor and boasts a supporting cast that includes Mako (Conan The Barbarian), Terry O'Quinn (Lost) and Bubba Smith (Police Academy series).