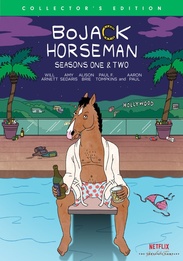 Set in a Los Angeles in which humans and anthropomorphic animal-people coexist, BoJack Horseman is an animated show about one man (who is also a horse) who peaked early and is trying to figure out what to do with his life now.

An outrageous and dark comedy with a melancholy center, the show asks the question, "what happens when you have the world at your fingertips and you still can't figure out how to be happy?"