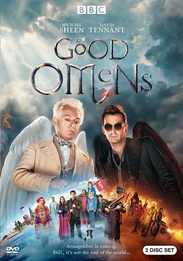 Aziraphale and Crowley, of Heaven and Hell respectively, have grown rather fond of the Earth. So itâs terrible news that itâs about to end. The armies of Good and Evil are amassing. The Four Horsemen are ready to ride. Everything is going according to the Divine Planâ¦except that someone seems to have misplaced the Antichrist. Can our heroes find him and stop Armageddon before itâs too late?