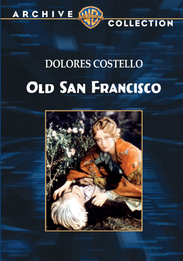 Buildings shake and crumble. Rubble rains down, burying hapless victims. Flames rage throughout what was once the Paris of the Pacific. This stirring recreation of the earthquake of 1906 is the finale to Old San Francisco, but plenty happens before the famed sequence. Warner Oland (later one of the screen's most memorable Charlie Chans) plays a cruel city boss, a Chinese disguised as an Occidental, who lusts after a gently bred daughter of the Spanish aristocracy (Dolores Costello). Set to a Vitaphone soundtrack with synchronized music and sound effects, the action careens from rancho to saloon to secret dungeon under the direction of Alan Crosland, who would make history later the same year (1927) with The Jazz Singer.