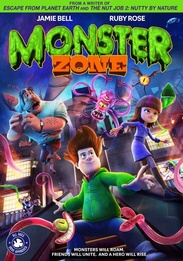 Imagine Harry Potter as a science nerd and you've got Danny Dawkins! At a private boarding school for geniuses, Danny teams up with classmate Liz to fix the school's broken nuclear reactor. But when he does, he opens a portal to another dimension, unleashing a horde of slimy monsters that terrorize the campus. Now, he and Liz must invent a way to send those nasty critters back home! This hilarious family adventure stars Jamie Bell (ROCKETMAN) and Ruby Rose ("Orange is the New Black").