Letters From An Indian Clerk 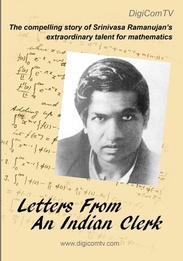 In March of 1914, against social and religious taboo, Srinivasa Ramanujan, a self-taught Indian mathematician, left his wife and family in India to sail to Trinity College in Cambridge, England. He was just twenty-six years old. With almost no formal training in pure mathematics, Ramanujan made extraordinary contributions to mathematical analysis, number theory, infinite series, and continued fractions. When his skills became apparent to the wider mathematical community, he began a famous partnership with the English mathematician G. H. Hardy. During his short life, Ramanujan independently compiled nearly 3900 results. Nearly all his claims have now been proven correct. He stated results that were both original and highly unconventional, such as the Ramanujan prime and the Ramanujan theta function, and these have inspired a vast amount of further research. This documentary was produced in 1987 during the centenary of Ramanujan's birth, and tells the fascinating story of a humble clerk working at the Port Trust Office in Madras, and who came to the attention of G.H. Hardy in 1913, a Cambridge mathematician and Fellow of Trinity College, when he received a ten-page letter containing many mathematical formulae and theorems which Ramanujan had put forth.