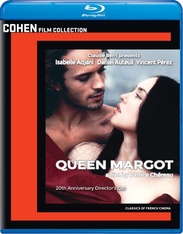 France, 1572. During an uneasy break in the wars of religion, Catholic King Charles IX (Jean-Hugues Anglade) concludes a marriage of state between his sister, Margot (Isabelle Adjani), and the Protestant Huguenot King Henry of Navarre (Daniel Auteuil), by ramming forward a reluctant Margot's head in lieu of a 'Oui'. But Margot's skull-faced Queen Mother (Virna Lisi) is already plotting the attack on the Huguenots that would come to be known as the St. Bartholomew's Day Massacre, and Margot is in the throes of a throbbingly romantic affair with the Protestant La MÃ´le (Vincent PÃ©rez). The late Patrice ChÃ©reau's high octane adaptation of the Alexandre Dumas novel begins in fifth gear and never lets up, plunging in hip-deep in history and into a dizzying array of characters, with assionate performances and a riveting, horrific staging of the Massacre.