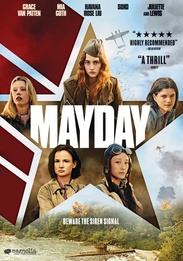 Casually abused hotel caterer Ana (Grace Van Patten) was just trying to get through a wedding when the power blew. Once she flipped the breaker, she found herself in a parallel, WWII-esque world where the war between the sexes isn't metaphorical, but martial--and the ruthless general (Mia Goth) in charge isn't interested in taking prisoners.