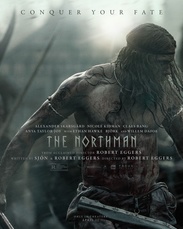 From visionary director Robert Eggers comes THE NORTHMAN, an action-filled epic that follows a young Viking prince on his quest to avenge his fatherâs murder.