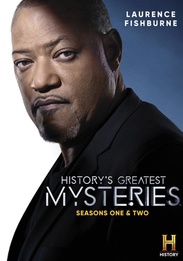 Historyâs Greatest Mysteries is a series of investigative specials that take the worldâs most well-known mysteries, and challenges everything we know about them. Narrated and hosted by Laurence Fishburne, the franchise will delve into a wide array of some of the most historically important mysteries of recent times: what was the true reason the Titanic sank? Where did D.B. Cooper disappear to? Did John Wilkes Booth live? Using fresh, new evidence and perspectives, including never-before-seen diaries and advanced DNA testing, Historyâs Greatest Mysteries will unearth brand-new information on some of Historyâs most famous and enigmatic chapters.