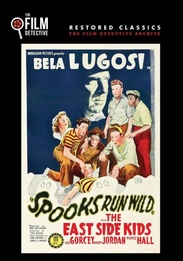 Bela Lugosi and the East Side Kids team up in this crazy comedy from Monogram Pictures. Leo Gorcey, Huntz Hall, Sunshine Sammy Morrison and the rest of the gang find themselves at a spooky mansion owned by the mysterious Nardo (Lugosi). Things get weird when the boys see one of their pals walking around in a trance. Did Nardo turn him into a zombie? Watch and find out!