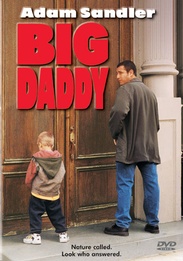 Thirty-two-year-old Sonny Koufax is a law school graduate steadfastly avoiding the soon-to-be-ex-girlfriend and prove he is ready for responsibility, Sonny accepts custody of five-year-old Julian under the pretense of being his biological father. Sonny and Julian bond through friendship during which Sonny is able to mature into a responsible adult.

Rated PG-13 for language and some crude humor.