There's Something About Mary 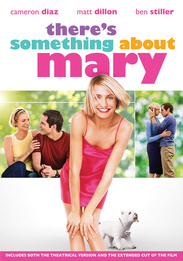 Still suffering from a high school crush on Mary (Diaz), the nerdy, angst-driven Ted (Stiller) tracks her down thirteen years later with the help of a sleazy private investigator (Dillon) who also falls for her. Unfortunately, both men discover that virtually every man that sets his eyes on the dazzling Mary finds himself head over heels in love and determined to win her hand.