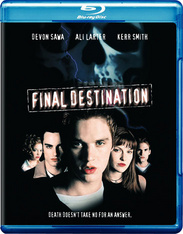 When a boy starts having a premonition of Flight 180 crashing, he tells his friends before they board that it is a bad idea and to not to take the flight. His friends listen to him and don't go and soon after the plane crashes. Now since his friends didn't get on the plane one by one they are getting killed in mysterious ways.

Rated R for violence and terror, and for language.